I've just finished editing a low budget short film. I'll be honest, I'd probably do this all the time, if there weren't bills to pay. I've edited television programs, feature films, documentaries, promos, weddings and much more. This, and in fact, all of the editing I've ever done has given me the opportunity to solve problems with new ideas and creativity. Fellow editors, well - at least the ones that enjoy their work, will know that when a film goes wrong, there are rarely occasions where the errors are actually their fault.

Is a mistake a mistake if you knew about it? - Once in a while film editors receive some really prestige rushes that have been filmed in conditions, that if recreated off of set, would help prevent the spread of Ebola. They've been well directed and produced by a cast that are so professional and perfect that they have the ability to never make any mistakes, they get it right first time every time. In the world of film, random events never occur. Producers always give editors ample time to make the most select cuts and to do it to perfection. In fact the reason that you see so many of us editors driving around in our Lamborghini's and Ferrari's is because we have so much free time - in most cases we do the editing on software like Windows Movie Maker, we don't need any technical gravitas or expensive software as the footage you give to us as good as edits itself. If it's particularly challenging we give it to a college student as 'work experience' for a credit. Meanwhile we go out and spend the big money on sex, drugs and rock and roll and have enough free to spare a drink on our celebrity buddies.

That's right Robert Webb, sarcasm (you or your editors have used it in much of your comedy) and nonetheless... I forgive you (not all of us will). The thing is, you broke both rules of Edit Club whereas I am (temporarily) breaking only one. I also respect that you are probably one of the best things that came out of Boston (since a Lincolnshire Sausage). I know that you need to pay your bills too; and, with all honesty, you are only the messenger as you didn't write it. Needless to say you are best known for empowering half of a well-known comedic duo; also, I can't expect any bloopers from Peep Show. It actually surprises me that the writers of Alan Partridge (Rob and Neil Gibbons) got involved in a program that patronises some of the most talented directors and editors of all time. Nonetheless, Great Movie Mistakes entertains a large audience and should be understood as productional genius. Maybe it is only the editors who truly understand how petty a lot of the mistakes are.

Follows is the short film, Rogue, which I've recently edited (there are a few versions). So often is the case with production crew but I struggle to watch any of my work, you always notice mistakes, especially after you've gone away for a while. I don't want to be noticed for mistakes when it comes to editing... it's not fair. This is because when I have ANY piece of work to edit, I have to consider many things other than the footage such as budget and time available. I know that I could make Peep Show look like a Hollywood Blockbuster if I was given both the money and the time.


(At least five borderline unacceptable continuity errors here)
- more info on this video here.
- A Youtube page with a more recent version of the video is here.

I love editing things like the above. It gives me a real chance to practice the skill as an art-form. This particular film was produced using three low-budget cameras, one of the cameras went wrong during the shoot and not all of the footage was HD. There were church bells and cars annoying the soundscape throughout most of the rushes and the hiring of the cast and use of the location had to be limited to only a few hours. If I watch the edit to try and pick mistakes in it there are many but what I primarily wanted to do was engage the audience. All of the analytics says that people are watching it to the end. Apart from the odd frame cut to speed up or emphasise the actions, there were a few continuity errors with this one that I just had to let fly. There are at least five, which if I had the time (or the footage), I'd go back and change. A few of these errors will scream out at editors but to a non-crew audience, you might be entertained by trying to find them yourself. Of course, I'll be particularly pleased if you struggle to find them, when you've been told they are there.

To summarise our defence as editors, we can't always avoid continuity errors. We aren't alywas gvien enoguh tmie to go back and check for errors. If weve got the time, we'l use it because, rest assured, we hate sending out errors more than you hate seeing them. To be able to watch the same moments over and over again suggests that many of us must be obsessive perfectionists. We polish and we polish some more, that's what we do. There is a certain grammar to editing anything, in a basic sense it's a form of architecture. Occasionally we use techniques that distract you from from other errors such as bad camera angles or awkward facial expressions (*extra points if you noticed that blooper). We're also the reason that the psychological thriller scares you and romance drama makes you cry. We're also responsible for less sacred arts such as making politicians look genuine and the news look real. The thing is none of it is real, as soon as someone has a camera on them they behave differently - we know this but we don't want you to know this as well. As soon as a news story is cut, it leaves out some of the ingredients. And Big Brother; - don't get me started.

Every piece of work is exciting and the jobs I look forward to most are when the Director or Camera-people are Editors themselves, it usually leaves more time for creativity. The bottleneck of the production process is in the edit suite... senior crew either give us too much or not enough quality footage to work with. I hope that producers and directors may read this and give us post-production crew less of a hard time. I think this message is to the people out there who don't really understand what we do or why we are needed. It's not a quick job whichever way you look at it. We've usually seen those continuity errors and other mistakes as many as a hundred times before they end up being broadcast - we don't always have a choice. Often we find ourselves either having to create something from nothing or having to sit through hours of footage for a two minute extract. Producers very often think that as it's only two minutes, it's not going to take more than five. Audiences often think that 24 minutes of Coronation Street took one man a day to edit. No (at least I don't think so).

But please, Mr Webb, stand up for us. You wouldn't upset a waiter before you order a meal so don't upset an editor before you star in your next project. If you do return to Lincolnshire, I have plenty of productions you may take part in so give me a call. I might even have a role for you as an online editor. Unfortunately until I'm graced with your presence or I make it to Hollywood, I'll just have to pay my way editing something to a tight timescale or budget - for a regular income. In fact, I must go, because the producer wants it by the end of today.

The rules are meant to be broken but only if you know...

The Five Stages of Freelancer' Downtime 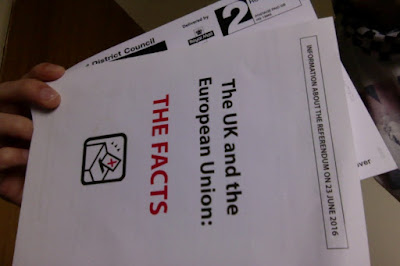 Scam alert: The Facts About The EU Referendum (with sarcasm)

A Knight's Tales
I am a Media Producer based in London, UK trying to make sense of existence. My observations inspire me both intellectually and artistically and often result in some creative endeavour such as a blog. I write mostly fact but may write fiction or anything in between. When writing in the realms of truth I approach a subject with skepticism and remain, as much as possible, editorially impartial. When views or opinions are expressed, they have been formed from an ever-evolving and open mind; the cause of which means that they are subject to change. I welcome your comments however as a skeptic I will not support any humanistic theory that holds no observational evidence other than your own personal faith. I will however be happy to debate the possibility of the fantastic.